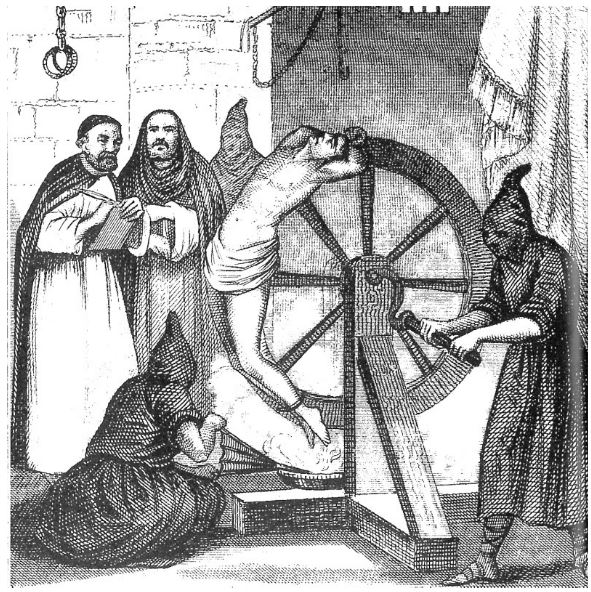 “The Spanish Inquisition was a perverse attempt to save people’s souls by torturing their bodies. Since only Christians of pure faith could go to heaven, the Inquisitors reasoned, and all others would be sentenced to the eternal torments of hell, it made sense to temporarily torture people of impure faith until they accepted Jesus, and thereby save their souls from the never-ending tortures of the next world.

Contrary to a popular misconception, the Inquisition was not directed against Jews, but against all supposed heretics, particularly former Jews who had converted to Christianity. Since these Jews had generally converted under duress, either to save their lives or their livelihoods, the Church had good reason to mistrust their sincerity. Inquisition officials, aided by informers, continually and carefully scrutinized these new Christians. If any of their actions indicated that they might be secretly practicing Judaism–perhaps they were observed never to eat pork or cook on the Sabbath–these “new Christians” were summoned before the Inquisition. The Inquisitors, all of whom were priests, asked the accused if they were secret Jews. If they confessed immediately, and supplied the Inquisitors with names of other secret Jews, they got off lightly: a religious ceremony at which they made public confession, and suffered various humiliations. If they were convicted of being secret Jews and only then confessed, they were guaranteed a less painful execution: They were strangled before being burned at the stake.

Those people who refused to confess even after being convicted, or who were courageous enough to acknowledge that they were still Jews, were repeatedly tortured to force them to concede the truth of Christianity. During the centuries in which the Inquisition had power, thousands of secret Jews were put on the rack, had water forced down their throats after their noses were pinched shut, or subjected to other tortures. All these actions carried out by priests who claimed to be motivated only by love of the people they were torturing.

Those Jews whom the Inquisitors couldn’t win back to Christianity were burned at a public ceremony known as an auto-da-fe. . .” – – Rabbi Joseph Telushkin, Jewish Literacy, pgs 194-195.

The fruit of some religions has always been forced conversion of others. The bigger the religion, the more secular power it has. The more secular power it can yield, the greater the atrocities it produces toward those that act or believe differently. Hatred between some religious sects is as strong today as it was centuries ago. The crimes against humanity have never disappeared because the hatred proliferates and spreads. Hatred toward those that espouse variant beliefs is taught at the youngest possible age in order for religion’s followers to grow to a place where they are willing to kill for their religious beliefs; or, die for them. Religious indoctrination has been at the root of millions of tortures and murders throughout history and, even today. Not only this, but religious indoctrination is also at the root of the suppression, control and abuse of women and children worldwide. Religion is responsible for centuries of teachings against women’s autonomy, authority and equality. As a result, women have become the most abused race of people in human history. For a brief list of the fruit of these atrocities, see my article: The FRUIT of Male Leadership – A Shocking Reality.

Is the picture becoming clear yet? After all the many articles on this blog that have exposed the truth of history, can one see the bigger picture? The corruption that hides under the righteous mantles of religions the world over have caused religious followers to be ready, at any time, to bear arms and attack those that disagree or believe differently. Bloodshed, war, torture, physical abuse, sexual abuse and emotional abuse are the biggest fruits of religion. History shows that clearly. The articles on this blog show this clearly! Religion’s weapons are Bibles, religious doctrines and rules, labeling (of those who disagree), slander, public humiliation and shaming, shunning and, damnation in hell. It’s time to remove the power and control of religion and give it back to the only one that deserves it; one who is merciful, gentle, loving, kind, compassionate, long-suffering, all powerful — God. God loves those that religion hates!! Why can’t people understand that? He blesses the just and unjust because he loves mankind as a whole.  Men have taken too much upon themselves in the “name of God.”  The fruit of this religious take over by men, is heavy laden on the annals of world history. Let’s get men out of God’s shoes and put God back in them. Let’s undo the damage that has been done through corruption of the religious system. Women need to be given their equality, honor and dignity back. Those who believe differently need to be freed from antisemitism and hatred and turned over to God’s hand to do the work in their lives. Forcing religion is wrong; especially when it’s done in the “name of God.” God doesn’t need religion or men to force-feed people their corruptions, man-made doctrines and rules, or hatred toward others. God is bigger than that and more loving than that. He can do what man cannot do in the hearts and minds of his creation. Let’s get religion out of God’s way so HE can work in people’s hearts and lives; so HE can control the hearts of men and women; so HE can have the preeminence. . . instead of religion and its leaders. Religion’s fruit is abhorrent to God and, a crime upon humanity. Sure, religion looks good on the outside, but on the inside, it’s rotten to the core and has a lot of innocent blood on its hands.