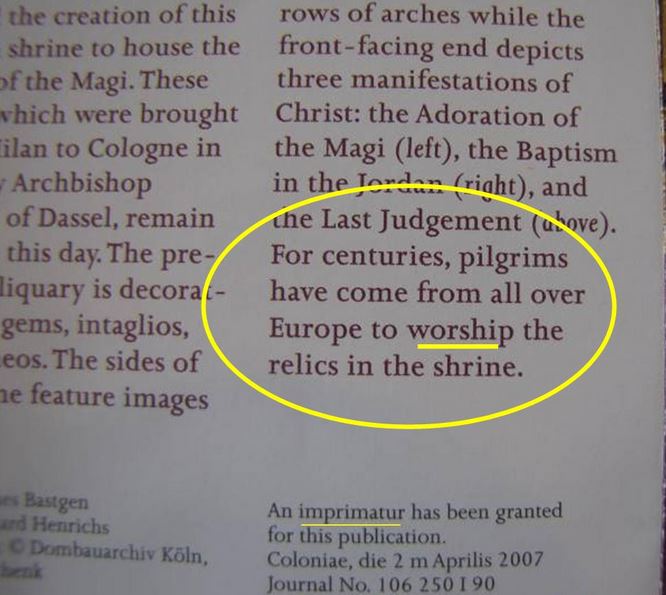 During the early centuries, there were many corruptions to Christianity that took place. I have systematically tried to touch on as many of them on this blog as I can in order to show that these corruptions still exist today.  Some of the corruptions, as we have seen, have had a huge impact on societies and cultures around the world. One of the corruptions that many do not realize is a corruption, is the worship of relics. These relics, during the early centuries were usually the dead bones, body parts or blood of the martyrs as you will see from this excerpt from Early Church History to the Death of Constantine. However, as shown in this example of the legend of Constantine’s mother, we clearly see that it was not limited to such. Sadly, during this time period, the state of Christianity had declined substantially. The mix of paganism into Christian worship was to blame for a large part, however, not all.  Another root cause for some of the corruptions, as mentioned repeatedly on this blog, was control, power, prestige and money.  This said, let’s look at what history tells us about the worship of relics and when this practice came into being. At the end of this excerpt, I will try to bring this practice around to today so we can see the true nature of it. Here it is.

THE WORSHIP OF RELICS. We have seen how the brethren who in the year 258 flocked to witness Cyprian’s triumph over death, spread handkerchiefs on the ground before him to catch his blood; and in how foolish a way Lucilla, half a century later, manifested her veneration for the memory of the martyrs. There were, it is probable, many Lucillas during this period, but it does not appear that the adoration of relics came into general use before the middle of the fourth century.

One relic, however, had already begun to command universal veneration previous to the death of Constantine. This was the wood of the supposed true cross. The following is the account handed down and believed for many centuries, of the finding of the cross. In the year 326, the Empress Helena, Constantine’s mother, then nearly eighty years of age, made a pilgrimage to Jerusalem, to offer up prayer and to visit the sacred places. When Hadrian destroyed Jerusalem and built Aelia Capitolina on its site, tradition states that in order to obliterate every trace of the Holy Sepulchre, he raised the ground around it and erected there temples to Jupiter and Venus. The Empress (so we are told), guided by a heavenly dream, discovered the spot which had been so carefully concealed. She caused the temples to be destroyed, and on the ground being cleared, the sepulchre was discovered with three crosses lying near it, and apart from them the superscription set up by Pilate! Being doubtful which of the crosses was the Lord’s, the Empress, with the Bishop Macarius, subjected them to a miraculous test. A lady of Jerusalem was lying at the point of death. The bishop suggested that all three crosses should be applied to the dying woman. The first two produced no effect, but at the touch of the third she rose up before them perfectly healed. The identity of the true cross being thus determined, a portion of it was encased in silver and committed to Macarius to be kept at Jerusalem; the remainder, together with the nails, was sent to Constantine, who enclosed it in his own statue, which stood in the forum of the city on a column of porphyry, and fixed some of the nails in his helmet. He had the rest wrought into a head piece and bit for his horse, and used them in his wars; in which the next age saw the fulfilment of Zechariah’s prophecy: “There shall be on the bridles of the horses holiness unto the Lord!”  So miserably had men perverted the religion of Christ; so completely had the words of the angels to the women at the sepulchre been forgotten, “Why seek ye the living among the dead ?”

Note: The details of this legend, variously related, rest on the authority of works written from fifty to a hundred years after the event. One of the authors to whom we owe them, Socrates Scholasticus, candidly confesses, either in reference to the piece of the cross or to the whole legend, “This indeed I have by report and have written it down.” The silence of contemporary writers is very noteworthy. In the Itinerary of the anonymous pilgrim from Bordeaux to Jerusalem, referred to the year 333, we have a description of the city, with the mention of many of the traditional sites both of the Old and New Testament. Amongst these are the Mount of Golgotha and the Holy Sepulchre, with the beautiful church recently erected over it by Constantine; yet there is no allusion to the cross, nor is the name of Helena once mentioned. Eusebius again whose Life of Constantine was written probably in 338, records the visit of the Empress to Jerusalem, but does not connect her name in any way with the place of Crucifixion or with the Holy Sepulchre; he only speaks of the place as “the spot which was discovered.” Constantine himself, in his epistle to Macarius, although he seems to speak of the discovery of the sepulchre as miraculous, says nothing regarding the manner of its discovery, and nothing respecting the cross. Lastly Cyril, whose catechetical lectures were delivered some twenty years later on the very spot, has nothing to say regarding the Empress.

It was not, however, only a credulous old lady and her superstitious son, or an ignorant bishop, who fell into such a snare; the whole Christian world seems to have been ready to follow them. Cyril of Jerusalem, writing not more than twenty years after the supposed discovery, says that by that time the wood of the cross had been diffused nearly throughout the whole world. The fact is that men’s minds had long been preparing for a return to idolatry in some form. The Church had become like the trees in some wide valley of the western world at the end of a scorching season; the legend of the discovery was the spark by which the forest was set on a blaze. By A.D. 386 the interposition of the law was requisite to check the traffic in sacred remains. “Let no one remove a buried body; let no one carry away or sell a martyr.” It was the monks, as Augustine tells us, who were the foremost in “retailing the limbs of martyrs, if martyrs they are.” (Backhouse)

What we can see from this tidbit of history is that merchandising of ” men’s souls” had already begun to take place. In the Revelation, it mentions this merchandising:

Rev 18:13:  And cinnamon, and odours, and ointments, and frankincense, and wine, and oil, and fine flour, and wheat, and beasts, and sheep, and horses, and chariots, and slaves, and souls of men.

Today, this merchandising and worship of relics still takes place. As a matter of fact, my mother and father purchased a dead bone of one of our ancestors, St. Francis of Assisi, from the Church of Rome many years ago when I was just a teenager being raised in the Catholic Church. This dead bone was so holy that it was required to be encased in a gold chalice. This relic and chalice cost my parents a lot of money to secure.  I was told, as a young child, that if ever any sickness came upon any of our family members, this bone could be placed in the body and it would heal the sickness. I was also told that every year on the feast day of St. Francis, the bone would bleed and my mother would have to clean the relic.  I don’t know what ever happened to that relic. I don’t even know if my parent’s ever used it, or if it bled like I was told. My thoughts, as a child, were these:

Needless to say, worshiping of relics of all kinds takes place the world over. Another memory I have as a young adult was this: I remember watching an evangelist on TV. He was selling pieces of cloth that he had prayed over that were supposed to have some miraculous power. Anyone that donated a certain amount of money to his ministry would get one of these “holy” cloths (relic). What I remember so vividly during that time was that I was searching for God. This TV evangelist used eloquent words to play off the emotions of his listeners to get them to donate to his ministry in order to get one of these holy cloths. I was so broke at the time, but, I found a way to come up with the money to donate and get that cloth! As ignorant as I was about religion and God, I wanted to have God with me. That holy cloth represented God to me. I don’t know what ever happened to that cloth, but the memory is a constant reminder of how a very poor person can be hoodwinked into giving up their money. It happens all the time in religion.

On a visit to Jerusalem, I saw that many of the holy sites were fenced off and learned that the reason for it was to keep people from picking pieces off of them because they believed that there was some miraculous power to them. The olive tree in the Garden of Gethsemene and the tomb of Jesus are just two of the sites that had to be protected from this.

Relics are a great revenue stream. I understand this. The truth of the matter is, however, that many people do not understand that it is only a revenue stream!  Churches the world over sell relics of all kinds, but, I only know of one that merchandises the “souls of men” through the selling of body parts. Think about it. To this day, I don’t know how they got away, legally, with sending my parents a bone from a dead person encased in a gold chalice. I have to also mention this: How do we even know that it was a bone? It could have been a piece of petrified wood and my parents would never have known. But the point is this: The Church said it was a bone and, not just any bone, it was a bone from our distant relative who was a Saint!  Isn’t it amazing that we will believe everything the church tells us without putting forth our own effort to research to find out if what we are being told is true? Isn’t it also amazing that, if we just use a little common sense, it could save us a lot of money! Whether or not this bone had miraculous powers, I will never know. But, as a child and then an adult, the same questions persist in my mind.

One more thought before I finish. If you look at the picture above, you will notice that this excerpt from a piece of Catholic literature tells us that for centuries people have traveled to that particular shrine to worship the relics in it. Worshiping relics takes away from worshiping God. It is idolatry. Idolatry has been going on from the earliest of ages. God hates idolatry. Just something else to think about.