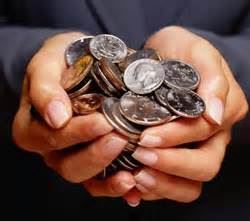 On ” the day called Sunday,” says Justin, “all who live in cities or in the country assemble in
one place, and the memoirs of the Apostles, or the writings of the Prophets, are read as long as time permits ; and when the reader has ceased, the president verbally instructs and exhorts to the imitation of these good things. Then we all rise together and pray, and when our prayer is ended, bread and wine and water are brought, and the president offers prayers and thanksgivings, according to his ability, and the people assent, saying, Amen : and there is a distribution to each, and a participation of that over which thanks have been given ; and to those who are absent a portion is sent by the deacons. They who are well to-do and willing give what each thinks fit ; and what is collected is deposited with the president, who sends assistance to the orphans, and widows, and the sick, and those who are in bonds, and strangers, in a word to all who are in need.” — Edward Backhouse, Early Church History to the Death of Constantine

On “Sunday” all the money that was collected was given to the orphans, widows, the sick, those who are in bonds, strangers, and those who were in need. The monies, food, water and wine that was brought by all was distributed amongst the families within the assembly including those who could not make the assembly. (Notice there is NO CHURCH BUILDING).

All monies collected were given to those inside and OUTSIDE of the CHURCH assembly that were poor and in need. The corruption that came with the collection of monies is just another reason that we should question everything that a church does with our money. Why give money to a church when you can give to those in need yourself. God never commanded us to give to a religious institution. He commanded us to give to the poor and needy. When you give to a religious organization and they control where the money is spent, you are just throwing your money into the pockets of the leadership, and the majority of it, will never reach those who truly need it. Think about it. Who REALLY benefits the most from your giving? The church and its leader, or the poor and needy? The church and its leader, or those within the assembly that are poor and in need of it?

If you have not read my book, The Truth About Tithing, I would highly recommend one do so and learn the reason why churches push Tithing for the Gentile populous that were never under the Old Testament covenant that included tithing. Only the Jews were under that law and that covenant has been annulled through Christ and his sacrifice on the cross.