Humiliation has to be one of the cruelest forms of abuse one can perpetrate against another individual. Yet, countless millions of men, women and children are publicly humiliated every day as a result of religious institutions and their followers the world over. Under the guise of “religion,” “faith,” “Christ,” or “God,” the “clones of the religious systems of the world” are using God and scripture not only to humiliate people, but to hurt them and  murder them.

Humiliation inflicts irreversible damage by placing a banner of “shame” and “stigma” upon its victims. As a result of this shame and stigma, anyone associated with the one being humiliated has that same shame and stigma transferred to them.  This is why humiliation is a weapon of choice, not just to religious fundamentalists here in America, but to religious fundamentalists everywhere.  The real tragedy, though, is that this is done in the name of the “God” of the religion that the one inflicting the humiliation serves.  As a result, countless millions are turning their backs on God, not just the “religious system.”  Victims of the abuse are blaming God for everything that these religious fundamentalist do to them; not realizing that the abusers are MEN, not God.  God is bearing the blame for what wicked men have done to others as a result of religious indoctrination. Why aren’t the perpetrators of these crimes being held accountable for their crimes and being prosecuted? Because the “Beast” has become big, powerful and dangerous.

Unfortunately, what “zealots for God” do not realize is that they are portraying their “God” as a merciless, hateful deity who exacts abusive behaviors from its followers. Who would want to hang around a person that perpetrates abusive crimes against others; humiliates others, murders? Why would anyone want to worship a deity that exacts these qualities from its followers toward others, especially children?  Think about it. A deity that WANTS you to publicly humiliate and destroy another is worthy of love, respect and honor? Not only are fundamentalist zealots using humiliation, they are using cruelty and murder  toward those that oppose them; and, doing it all in the name of their “God.”

How did humanity become so cruel that they no longer look to the benefit and welfare of others because of religious beliefs? Where has love, dignity, respect, compassion and mercy gone?  Has humanity lost its milk of human kindness and compassion? Where’s the protection from these crimes that the weak and vulnerable deserve?  The religious systems of the world have become a  ferocious “Beast” that is so great and powerful, that it can dish out crimes against people without accountability.  Because of this, they use this weapon of choice on all who oppose it and, actually put their “stamp of approval” on all who use it.

This “Beast” sways political leaders, governments and millions of peoples the world over.  It devours multitudes leaving behind a swath of destruction that makes the worst criminal pale in comparison to it.  They influence followers to murder and mutilate all in the name of the “God” they serve.

Throughout the world, the atrocities and crimes against women and children meted out publicly, defy conscience and morality.  Recently, I came across the following news story online and it broke my heart.  Not only was this lady publicly humiliated, she was tortured and killed publicly. Is this the state and mentality of religious believers that the religious systems of the world wish to portray?

Read the last line of this story. The mentality is no different than during the “Inquisition”.  The fruit of that “mentality” is murder, torture and public humiliation.  The targets are usually women and children. 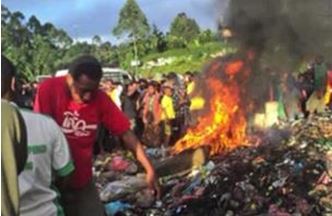 MSN News – February 7, 2013 – A young mother accused of sorcery was stripped naked and burned alive in front of a crowd.

According to UPI, the relatives of a six-year-old boy who died in Papua New Guinea tortured and burned the woman to death because they believed she had used sorcery to kill the boy.

Papua New Guinea’s The National reported Thursday that the boy had been taken to Mount Hagen hospital Tuesday after complaining of stomach and chest pains. He died at the hospital.

The boy’s family accused three women of using sorcery to kill the boy. One of them, Kepari Leniata, 20, admitted she was responsible.

The relatives reportedly tortured Leniata with a branding iron, stripped her naked, tied her hands and feet with rope and threw her onto a pile of burning car tires and rubbish in front of a crowd that included schoolchildren, The National reported.

Although paramedics responded to the scene, they were unable to save Leniata, who has a 8-month-old daughter.

The Papua New Guinea Post-Courier reported that the sorcery-related murder took place in full view of hundreds of onlookers. “The torture and brutal murder of a mother of two provided a photo opportunity for many of the onlookers, including school children, who crowded around and took photos of the woman being consumed alive by the fire,” said the newspaper, which published a photo of the incident.

The newspaper also reported that although firemen rushed to the scene, angry perpetrators chased them away. Several policemen present at the scene were unable to save the women because they were outnumbered by the perpetrators and their supporters.

The lives of the two other women accused of sorcery were spared.

Papua New Guinea police are planning to file murder charges against those responsible.

”People believe it’s (sorcery) something that exists, but it’s a crime. People will have to be arrested,” said Papua New Guinea police spokesman Dominic Kakas, according to the Sydney Morning Herald.

“As long as people believe in sorcery and they will tend to take violent action in relation to that, we will still have such killings in relation to that. That is why the commissioner is concerned, and he wants everyone to sit down and put their heads together and find a way to address this issue so that we can end or stop such senseless killings.”

The incident was condemned by David Piso, the head bishop of Gut Nius Lutheran Church.

“Sorcery and sorcery-related killings are growing and the government needs to come up with a law to stop such practice,” Piso said.

An Oxfam research project concludes that legal reform and education are essential to reduce the damaging effects of sorcery beliefs in Papua New Guinea.

The Oxfam report says that many people in Papua New Guinea don’t want to accept natural causes as an explanation for misfortune, illness, accidents or death, instead attributing them to supernatural causes called sorcery or black magic.

An excerpt from the report says: “Belief in black magic is so ingrained the government recognizes it under the 1971 Sorcery Act. This punishes those practicing black magic with up to two years’ imprisonment. Murderers can reduce penal sentences by alleging black magic was involved.”

People believed to have committed black magic have been subject to shocking “payback” murders, torture or punishments. The report says that women, widows without male kin, elderly people and independent and progressive women are often victims of sorcery accusations and attacks (emphasis mine).

HOW can this type of atrocity be attached to a “loving” God? How can religious people’s consciences be so seared that they become so cruel? How can people be so ignorant of truth?  Before you take to using these weapons of choice, think about the kind of character and testimony you are exhibiting about yourself and your “God.”