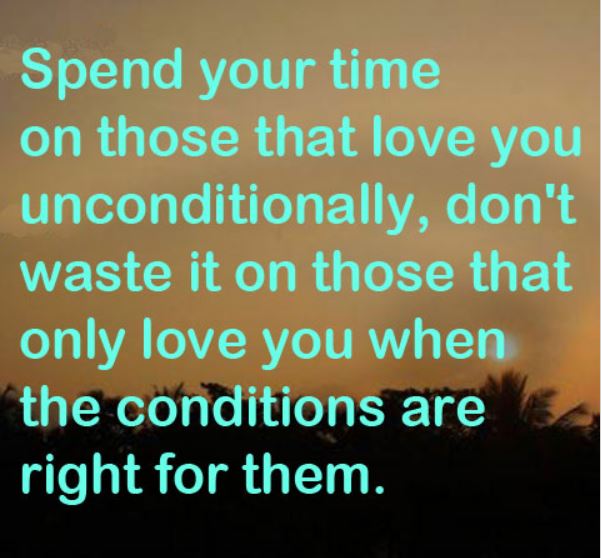 During the early centuries, persecution of the Christians began to proliferate. Christians were looked upon as the cause of many of the terrible things that happened during that time – like famine and pestilences. What Christians back then tended to do is the same thing that Christians of today do. They look to their own. Sadly, this is not wrong in itself to the extent that those one is looking after are immediate family. However, as Christians, when tragedy happens, it behooves us to look to the welfare and benefit of others too – even if they do not believe as we do, even if they are not family. This is what “unconditional” love is all about. If ever there is an opportunity for those who do not believe, to see God in you, it is through UNSELFISH and UNCONDITIONAL love.

What many tend to forget is that God does not place “conditions” on his love. God does not add any rules for us to follow in order for him to love us and bless us. God does not require us to even have FAITH for him to love us! Fathom that! God loves us because he created us and we are all his children. Even disobedient, faithless children are loved by him! Why? Because God IS LOVE. He loves us UNCONDITIONALLY.  This said, if God lives in us then, it should be an automatic response for us to love the same way, right? Tragically, this is not the case. What we find today are those that profess Christ and use his name to manipulate and control those around them. For example: God will not reveal HIS will for ME to anyone else but ME. I have had many different Christians that loved me and have “prayed for me” and then, had the audacity to tell me that what God has given me perfect peace about, is not His will for me! God is not going to tell others what HIS will for ME is. Let that sink in. God and I have a relationship that is CONFIDENTIAL between ME and HIM! How awesome is that? God doesn’t GOSSIP! His Holy Spirit was given to ME to guide ME and no one else, but ME.  And yet, throughout my lifetime, I have had not only others, BUT, my very own family members tell me God’s will for ME. What people fail to separate in their minds, is THEIR will from God’s will. Let me explain.  God’s will for ME will be different than his will for someone else. If God gives me peace about a decision or action and someone tells me that they “prayed” and it is not God’s will, a BIG RED FLAG goes up in my mind. That tells me that they are trying to CONTROL me. They have no interest in God’s will for me because God has already made his will known to me and I have peace about it.  They are trying impose THEIR will over God’s will for ME.  Beware of those that try to control and manipulate you using the words ” I prayed about it” or “God told/revealed to me” – they are false prophets looking to their own, wanting to have THEIR will in your life, not God’s. That’s a sign of manipulation and control, not love.

This issue of manipulating and controlling others “in the Name of God” has been going on for centuries. It is nothing new; and, it can be overcome through UNCONDITIONAL love. Unconditional love accepts people where they are and, does not require them to do anything to deserve the love.

The following excerpt shows how one REAL Christian, named Cyprian, handled a tragic situation and taught other believers how to show unconditional love toward the heathen during a time when they would have been persecuted further because of the pestilence that plagued everyone. Because Cyprian came to the realization that love draws people to God better than preaching and separated living, what he was able to accomplish was nothing short of astounding. How many heathen’s hearts were affected by this one man who was willing to stand in the gap and rally other Christians to the side of UNCONDITIONAL love instead of CONDITIONAL love that only “looks to its own?”

The ravages of the pestilence brought the two religions into sharp contrast. The epidemic, though it by no means spared the Christians, raged with greatest violence among the pagans, the result probably of fear, which predisposes so strongly to infection Dionysius, bishop of Alexandria, graphically describes the devotion with which the Christians of that great city attended on one another. “Regardless of their own peril, they visited the sick and ministered to them assiduously; and when they died taking them on their upturned hands and on their bosoms, they closed their eyes and their mouths; then laying them out decently they carried them to their burial; and in a little while after, joyfully following those who had departed before them the same services were in turn done to them. With the heathen all was the very reverse. They thrust aside those who began to be sick, kept aloof even from their dearest friends, and casting the sufferers out on the public roads to die, them there unburied.” Such was the condition of the city under this dreadful visitation, that Dionysius exclaims, “When will this air, befouled by noxious exhalations, become pure again? For there are such vapours sent up from the earth, and such blasts from the sea, and airs from the rivers, and reeking mists from the harbours, that for dew we might suppose we have the impure fluids of the corpses which are everywhere rotting under neath.”

The moral contrast was still more striking at Carthage, where the care of the Christians was not confined to their own community. The pestilence spread from house to house, especially amongst the dwellings of the poor, with awful regularity. Whilst the rest of the population were hardened in selfishness, an wretches were even plundering the houses of the dying, and whilst the multitude reviled the Christians as having drawn down the terrible visitation by their impiety, Cyprian called his flock together and exhorted them to extend help to all who needed it heathen as well as Christians. “If,” said he,” we merely do good to our own, we do nothing more than publicans and heathen. Now is the time to overcome our enemies by love.” Under his direction the city was divided into districts the rich gave their money, the poor their labour; the bodies which tainted the air were buried; and the sick, whether Christians or pagans, were nursed at the expense and by the care of the Church of Christ. — Edward Backhouse, Early Church History to the Death of Constantine, pgs. 146-147.

The testimony that rings loudly is Love. Cyprian exhorted other Christians to stop being so self-centered and selfish! What if Cyprian had not done so? Nothing would have changed and the heathen would have persecuted the Christians all the more because of the pestilence. However, because they saw the genuine love and care from the Christians, instead, how could they lay to their charge any more evil than the pestilence they too were already enduring?

Today, the church of God suffers because there are countless numbers of people that profess Christ and use his name to manipulate and control others through “rules,” “doctrines,” “dogmas” and the like (MAN’s WILL). God NEVER gave us any rules that we needed to follow to be loved by HIM. God is LOVE. God gave each individual his Holy Spirit to guide their life. By doing so, he extended EQUALITY to all – male and female. There is no INEQUALITY where God is. If you do not have a relationship with others that is EQUAL, then you are not right with God. There is no male nor female in Christ Jesus. We are all equal!

To impose your will on others is wrong. It is time for Christians to stop trying to control and manipulate others by imposing their will over God’s will in their lives. By doing so, they are carrying God’s name in vain and that is a very serious sin in God’s eyes! (See The Third Commandment – What it Really Means). Whenever possible, try doling out some genuine, unconditional love instead and let those you love make their own decisions. After all, that’s the best way to help people grow and become better. Unconditional love overcomes everything and speaks louder than your talk. Try it.