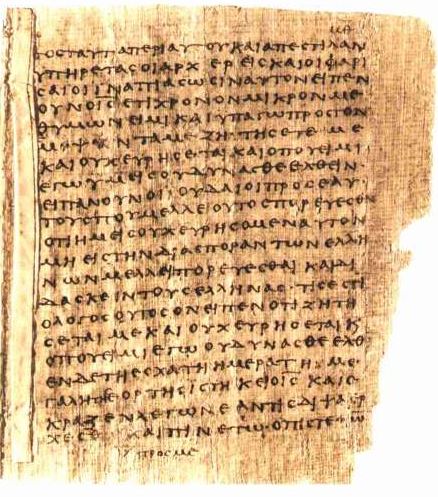 For centuries, Greek scholars have known about the many changes done by scribes in translation of the early manuscripts. What is sad is that mainstream theologians, preachers and Christians refuse to accept the fact that translators have made these changes. Most would rather believe that their English translation of the New Testament is “innerant.”  There are countless manuscripts in existence written in Greek and yet, due to copyist and translational errors, not very many of them match word for word. There are NO ORIGINAL manuscripts in existence. Let’s make that fact perfectly clear. All we have is copies of copies of copies of copies of copies. This is a reality. But why would someone want to change the manuscripts in translation?  In order to translate the text based on what they already believe, or, to make changes in order to lean people toward those beliefs. This is exactly what has taken place and people refuse to admit it. The usual response is quite amazing and usually wrapped up in anger and hatred toward anyone that points these truths out. This matter of corruption of scripture is serious! Scholars know for a fact that the manuscripts in existence are riddled with thousands of variations. Rather than attack those that bring to light these corruptions and call them “anti-Christ,” let’s fix the errors and corruptions! We now have technology and the best scholarship in history. Comparative analyses between the many thousands of manuscripts can be done with accuracy to deduce what is truth and what is not.

Sadly, one of the most blatant corruptions in translation has to do with women and their place in religion and society. Translators have made an obvious effort to point women in scripture into a direction of servitude to men and out of positions of leadership and autonomy.  It is time to shout from the rooftops what men have done in translation that has caused a race of people great harm throughout history — women. And, it is time to make the populous aware of the many changes that affect other areas of religious practice!

Educating people on the many changes in translation has been a focus of mine on this blog. Continually, I point out the corruptions so that minds can be set free of abusive dogmas and doctrines that lead to abusive behaviors and attitudes toward others. One cannot be truly free until one’s mind is free from bondage to religion and its doctrines and rules. Man-made rules were never a part of the teachings of Christ and, he never treated women with the disrespect that man-made religion does. I will continually point out what has been twisted and bring it to light on this blog.

Since very few people know about all the variants between manuscripts in existence, I want to take this time to give some insight on this matter.  Let’s talk about some of these changes in the Greek manuscripts of the New Testament:

The text of the Greek New Testament seemed to be a trusted source for most scholars throughout the sixteenth and seventeenth centuries. However, many scribes would add marginal notes identifying places of variation among several manuscripts they had looked at. Later, in the seventeenth century, “editions were published by English scholars such as Brian Walton and John Fell who took the variations in the surviving (and available) manuscripts more seriously. (Erhman)” However, no one really realized the magnitude of the problem with textual variations until 1707, when John Mill published a book that exposed all the variations. This book was so shocking that it caused scholars to realize that they need to take the textual situation of the New Testament manuscripts more seriously.

John Mill of Queens College, Oxford, invested 30 years of hard work collecting manuscripts for his book. The text that he printed was the 1550 edition of Stephanus; “what mattered for Mill’s publication was not the text he used, but the variant readings FROM that text that he cited in a critical apparatus.  Mill had access to the readings of some one hundred Greek manuscripts of the New Testament. In addition, he carefully examined the writings of the early church fathers to see how they quoted the text–on the assumption that one could reconstruct the manuscripts available to those fathers by examining their quotations.  Moreover, even though he could not read many of the other ancient languages, except for Latin, he used an earlier edition published by Walton to see where the early versions in languages such as the Syriac and Coptic differed from the Greek (Erhman, Misquoting Jesus, p. 84).

Mill published his text with apparatus in which he indicated places of variation among all the surviving materials available to him. To the shock and dismay of many of his readers, “Mill’s apparatus isolated some thirty thousand places of variation among the surviving witnesses, thirty thousand places where different manuscripts, Patristic (=church father) citations, and versions had different readings for passages of the New Testament (Bart Erhman, Misquoting Jesus, p.84).”

However, Mill’s apparatus was not exhaustive in that the data he collected did not include the countless variations in word order. According to Erhman, “. . . what it did include was enough to shock the public away from the complacency into which it had fallen based on the constant republication of the Textus Receptus and the natural assumption that in the T.R. one had the “original” Greek of the New Testament. Now the status of the original text was thrown wide open to dispute.  If one did not know which words were original to the Greek New Testament, how could one use these words in deciding correct Christian doctrine and teaching?”

The impact of Mill’s publication was immediately felt. The scathing attacks that followed from conservative theologians was huge. One protestant conservative, Daniel Whitby, believed that “even though God certainly would not prevent errors from creeping into scribal copies of the New Testament, at the same time he would never allow the text to be corrupted to the point that it could not adequately achieve its divine aim and purpose (Erhman, Misquoting Jesus, p. 85).” In 1710, Whitby published his own set of notes to dispute Mill’s findings. In his publication, Whitby suggested that Roman Catholic scholars “would be all too happy to be able to show, on the basis of the insecure foundations of the Greek text of the New Testament, that scripture was not a sufficient authority for the faith– that is, that the authority of the church instead is paramount (Erhman, Misquoting Jesus, p. 85).”

“Whitby may have intended his refutation to have its effect without anyone actually reading it; it is a turgid, dense, unappealing one hundred pages of close argumentation, which tries to make its point simply through the accumulated mass of its refutation (Erhman, Midsquoting Jesus, p. 86).”

Let me point out here that this is what many conservative Christians do in refuting the work of those that have labored intensively for years to bring the truth to light. They have no factual basis for their refutations. They parrot what they have been taught as truth and use those teachings as grounds for dismissing facts that prove their dogmas and doctrines are not what they should be. They label any work that exposes lies and errors in translation as an attempt to destroy the Bible. They label anyone that exposes the corruptions as “anti-Christ” instead of realizing that the facts don’t lie and something needs to be done about all the changes made.  Instead of realizing that Mill did not INVENT the variant readings – that he only pointed them out– it became a personal attack on Mill’s character to discredit what he had brought to light. Every time I point out a corruption in Scripture that has caused women much harm, conservative Christians think that I made up the corruptions and make it a personal attack on me, wishing to discredit ME instead of looking at the findings and realizing that I am only pointing out what re-known scholars have pointed out before me.

Because of Mill’s publication, the result was that it drew responses from many learned and indignant people. The most significant being a scholar of enormous international reputation – the Master of Trinity College, Cambridge, Richard Bentley. Bentley was known for his work on classical authors such as Homer, Horace, and Terence. What Bentley pointed out, is what is mentioned above – the variations Mill’s points out existed before he pointed them out and that, “If Religion therefore was true before, though such Various Readings were in being: it will be as true and consequently as safe still, though every body sees them. . . no Truth, no matter of Fact fairly laid open, can ever subvert true Religion (An Account of the Printed Text of the Greek New Testament (London: Samuel Bagster & Sons, 1854).”

Bentley was an expert in the textual traditions of the classics. He pointed out that anytime you find large numbers of manuscripts, you will find a multitude of textual variations. If there were only one manuscript of work, there would be NO textual variants. The good thing about the variants is that they show where the preceding manuscript has preserved an error and, they also show where the original text is preserved. So, variants do not detract from the integrity of the New Testament, they just provide the data that scholars need to work on to establish the text that is more closely aligned to what the original authors wrote! Another thing that these variants do is show with clarity the changes made that affect women and their standing in the world today.  What was done was “on purpose,” and not by accident. Men willfully changed scripture regarding women. As a result, woman have been the most abused race of people in human history. The facts regarding these changes that affect women have been brought to light by many re-known scholars over the centuries, but have been ignored by mainstream theologians. Why? It is my humble opinion, based on the evidence I have read, that men wish to continue to have a male-dominated religious system that subjects women to their whims of servitude and abuse. This also gives them sexual dominance, which is a key factor in this issue of control.

It is time that the Bible translations that many mainstream religions use as a foundation for their teachings be revised and many of the errors removed; especially, regarding women. Women need to be given their equality, honor and dignity back. Religion permeates every society in the world. Religion is the foundation for beliefs, actions, attitudes and character of men and women everywhere. Religion has pointed women down a road of submission and servitude to men and robbed them of equality, autonomy, status in society, etc. Correcting translations with these errors, will help to change attitudes and behaviors toward women and help to alleviate the doctrines and dogmas that lead to their abuse and inequality.