We are not Entitled to Anything 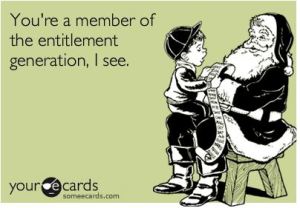 One of the prevailing attitudes in society today is the attitude of “entitlement.” Countless multitudes of people believe that they are “owed” or “deserve” things based on who they are or what they have done.  As an adult, I often find myself saying, “I deserve better than what has been handed me.” Sometimes, I have even felt I deserved the love and respect of my children as their parent. However, I no longer feel that I am owed or deserve better in life; nor do I feel that I deserve, or am owed, my children’s love or respect. Let me explain.

Today’s culture has instilled a mindset of entitlement here in the U.S. Advertisers are very adept at telling us what we deserve. We are taught that because of ______, we deserve _____.  You can fill in the blanks.  However, this is not true. As hard as it may be for you to hear this, no one is entitled to, or deserves, anything.

By way of example, I will use my relationship with my husband to show you how destructive this attitude can be.

My husband worked very hard for his employers. As a matter of fact, he worked on average about 70 hours per week, year in and year out, all our married lives. There were countless weeks where he exceeded that 70 hours and he continually brought his work home and let it interrupt “our time” together. He has always had a fantastic work ethic and has even instilled the same work ethic in our children.  This said, when he did have any amount of time with me at home, he felt he “deserved” to be catered to and waited on by me for whatever he wanted. He didn’t feel he needed to do any work at home.  After all, because he worked so hard at his job, he felt he was “entitled” to not fix things around the house or help me with anything at all!  He made me feel like a servant in my own home when he was off!   If I did not do what he wanted, then he would get angry at me and we would end up in a fight. He felt “entitled” to do nothing and be catered to.

While he was working, I was taking care of the kids, the pets, the house, the yard, the finances, the grocery shopping, kids activities, church responsibilities, etc. My days were just as full as his with stuff to get done every day – and night, if the kids were sick! He expected me to work a minimum of 8 hrs a day every day and if I didn’t, he would get angry.  I felt I deserved and was “entitled” to be treated better than a hired servant and, I felt I deserved to have more of his time too!

While my husband was “expecting” certain things from me, I was “expecting” certain things from him. When either of us did not get what we expected, it caused us to get angry and argue. This “I deserve and am entitled to” attitude was further exacerbated by the teachings of the churches we served in. The women were degraded to nothing more than servants to their husbands and the men ate it up! They felt entitled to a sex slave, a servant, a cook, a housekeeper, a bookkeeper, a teacher to the kids, and so much more! This led to lots of arguments, it led to abuses. Eventually, it almost led us to divorce! Because we both felt we were “entitled” to be treated a certain way, we would get angry when we weren’t.

As a result, our marriage began to crumble.  When our marriage began to fall apart and my husband realized he was about to lose me, he had a change of heart and attitude. My husband suddenly realized that he did not “deserve” anything from me! He stopped taking me for granted and began to treat me with genuine love and compassion without expecting anything in return. Did he “want” my love and companionship? Yes. But he was no longer demanding it!  He would tell me, “Honey, I love you so much. I don’t deserve your love, or you. But if you choose to love me, I will be the happiest man alive.” His change in attitude and actions toward me opened my eyes to my expectations of him and helped me to see that I needed to eliminate any expectations in my mind!

As a result of letting go of what we each felt “we deserved,” our relationship developed into a respectful, caring and loving relationship that transcended anything we had ever experienced before in our marriage.

The “we want” mentality, instead of “I demand,” led to each of us appreciating the little and big things that each of us did for each other on a daily basis. When you expect and don’t get, it causes anger and resentment; or worse, bitterness! When you want something and don’t get it, it just causes disappointment. Disappointment is much easier to deal with than anger and bitterness! My husband does not “owe” me his love. Do I want his love? Yes. Because I want his love, I treat him with loving care and do not get angry because he works all the time. I also go out of my way to please him and he does the same for me.  Because he wants my love, he doesn’t expect me to wait on him like a servant and instead, pitches in on his off days to do what I need help with and, even give me a break!  It’s okay to want things, but we have no right to demand, expect, or feel entitled to anything. It’s okay to want better; but it’s not right to feel entitled to better.  Am I making sense here? The difference in attitude is a huge difference! It determines how we act and react toward others.

When we feel “entitled,” we do not appreciate what we have and, we become angry, resentful, and bitter toward others when they do not meet our expectations of what we think we deserve. It also causes us to take for granted what we do have and what we do have then becomes not good enough.  When we want something, and do not get it, we are simply disappointed and move on to something else.

We are not entitled to anything. Entitlement produces anger, resentment and bitterness. It is a kiss of death to a relationship. If you want a sure path to destruction, just believe you are entitled to something. Entitlement thinking will cause people to neglect the emotional and physcial needs of others while focusing entirely on themselves and their wants and needs.  This is selfishness personified!  The sooner we let go of this mentality, the sooner life becomes new and relationships blossom.