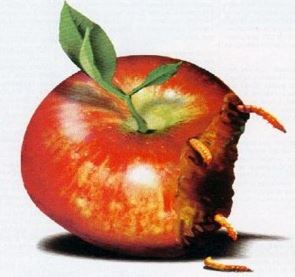 Many religions of today look like this Apple. They are so corrupted that they may not be salvageable.

Gradually, however, the notion of a priesthood, of a sacred order of men, found its way into the new society. Gradually the congregations were willing to relieve themselves of the onus of maintaining a thoroughly Christian life, and to commit their spiritual concerns to the care of their bishops or presbyters. These, on their part, began to assume a certain superiority in rank, and to restrict to themselves the title of the cleri or clergy (heritage of God), a title which hitherto had comprehended the whole body of believers. It must be presumed that the Church, having her vision somewhat dimmed by the spirit of the world, failed to see the danger into which she was falling, and did not perceive that Jewish modes of thought, instituting a false comparison between the Levitical priesthood and the Christian ministry, were perverting her original character. The result of this change was equally disastrous to both parties, to the officers of the Church and to the rest of the congregation. — Edward Backhouse, Early Church History to the Death of Constantine

It did not take very long for men to corrupt what once was “pure religion and undefiled” before God. Throughout church history there is an obvious “trail of corruption” by men, in order to gain power, control, prestige and wealth.  Every article on this blog exposes this truth. Every  where men elevated themselves to leadership within the church assembly, they instituted “rules” in order to gain control and power over the congregations. This “superiority in rank” as Backhouse terms it, was a leaven of corruption of the worst kind. It was the beginning of a new kind of worship within Christendom that led to blindness on the part of the people.  Instead of worshiping God, they made MEN their idols and bestowed upon them all the power, honor and prestige that was only to be bestowed upon God and his Christ.

Through these many “rules,” congregants were willing to give up their freedoms for bondage to an institution and, to the men running them. Little did they realize the magnitude of the corruption and the end result of it that we see today in churches everywhere. Anyone that “touts” himself as a “man of God” is revered, trusted and, allowed to lead. Some are given huge congregations to lead and others, small. But, all are allowed blind trust and followship by the congregants.  Many are worshiped as gods and as a result, there are countless abuses hidden underneath this system of worship. The targets of the abuse? Women and children within the congregations. When there is inequality in any setting, their will also be abuse. One of the first changes of these men of the early church, was to subjugate women and remove them from positions of leadership. Using their perverted translations of the scriptures, men of old made sure that women were subdued and thus, they became the most abused race of human beings in world history. . . all because of men and their man-made “religions.” The fruit of religion, for women, has been sexual exploitation and mutilation, physical abuse, rape, incest and murder and servitude to wicked men.

Coming to the surface of mainstream media are the numerous pastors and priests that have molested, raped and murdered women and children under the guise of “religion.”  Also, coming to the surface are the countless numbers of pedophiles hidden within this system.  What is shocking is that the congregations that follow these abusers, continue to do so, even after the exposure, unless, it is murder. Jack Hyles and Jack Schaap are prime examples of this mindset. How sad a day it is indeed when man worship supersedes truth and righteousness and, love, compassion and grace toward our fellowman.

It’s time for people to wake up to the reality that you cannot blindly trust anyone and bestow upon them power, prestige and money. You would not trust a stranger in this manner; yet millions trust “strangers” shrouded under the title “Man of God.”