From the Author: Words cannot express how proud I am of my son for approaching the subject of Religious Abuse and sharing his perspective on it. This is his first time addressing the issue and, what is even more amazing is that he has allowed me the privilege of putting it on my blog so that others may be helped by it. His name is not on it because he has asked me not to put it on it. He is also the one that put together this presentation to help victims of religious abuse escape. I simply put my voice to it. So, here it is. Please be sure to adjust your volume on the presentation! 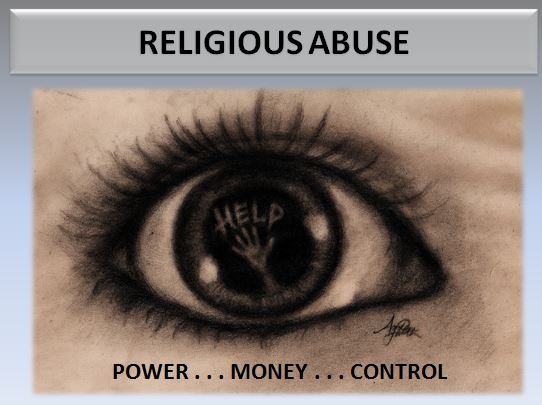 Religious abuse is an evil which can be difficult to recognize and can lead to chronic depression, rape, intimidation, physical abuse, permanent emotional scarring, and even suicide. Corrupted church leaders of today can use their power and influence to control, extort money, manipulate, and sexually exploit their victims. The effects of religious abuse are vast, but the steps which can be taken to escape from them are not. When victims learn to identify signs of religious abuse in churches and realize that they have personal liberty, they can break free by leaving the abusive church immediately. Victims of religious abuse who completely cut ties and cease contact with the abusive church can recover what is left of their scarred lives.

A dangerous, well disguised evil is sweeping across American churches like a dark beast of destruction, which preys on the lives of even the most devout. It is an evil which is most difficult to recognize, at first, and can lead to chronic depression, rape, intimidation, physical abuse, permanent emotional scarring, and even suicide. Some might argue that this evil originates from the very Devil himself, an attempt to destroy that which is seen by many as holy and pure – the church. This evil comes in the form of religious abuse and can be brought to life through corrupted church leaders in power, monetary greed, and demand for total control of people’s lives; escaping victims must learn to recognize the warning signs, be aware of their personal liberty, and take immediate action to leave the abusive situation.

What could cause such destruction in a person’s life? It’s simple; the impression of absolute power and authority supposedly given by the bible or Jesus can cause almost anyone tempted to become corrupted by it. Once that individual in power decides to abuse the “biblical authority” given to them, believers can become trapped under its rule. There are many ways that victims become trapped under this oppression, but according to David Johnson, two of the main reasons are “they are literally powerless to leave,” perhaps like children born into it, or “because the spiritually abusive system [itself] is a trap” (1991, p. 54). This may be difficult for those who haven’t experienced it to understand, but the cycle of abuse can look something like this: “Out loud shaming, focus on performance, manipulation, idolatry, preoccupation with fault and blame, and obscured reality” (Johnson & VanVonderen, 1991, p. 56-58). Once a person submits to the “authority” of an oppressive church leader, their own sense of personal liberty can be replaced with a sense to obey the “rules” and not to question what is said.

In some positions, a religious leader can become additionally motivated by monetary greed. With the cycle of abuse already in place, they use manipulation in their teachings to convince their victims to give exorbitant amounts of money towards their religious cause or even a personal salary; often attempting to bring guilt on those who do not (McClaskey, 2012, p. 106). Some victims are required to hand over more than 10% of their gross monthly income plus an extra equal or greater margin for regular “gifts” to the leadership, as tokens of their servitude or “commitment” to the organization (McClaskey, 2012, p. 75). This money is often used to build the personal wealth of the leader and to fund the church, continuing the cycle of abuse.

Corrupted power and monetary greed are directly related to a leader’s obsession with having total control over his victims. This begins with a church leader’s power and usurping the authorities they claim were given to them by the Bible, Jesus, or some other religious authority. Victims become convinced their leader has the authority to control them. The control doesn’t stop within the walls of the church; it often “infiltrates into the homes of their believers, with their strange doctrines and rules” (McClaskey, 2012, p. 36). Victims are intimidated, threatened, or in some cases physically beaten into submission (children, teens or spouses) if they don’t comply with the church leader’s rules (McClaskey, 2012, p. 56). Group conformity and total submission to the church “system” are ideas that are not allowed to be questioned in these abusive situations – questioning might lead victims to break free. In many cases, victims who escape are verbally attacked and scorned in front of the church; they lose all group interaction, including immediate family support. Many victims still feel the far reaching, abusive arms of control many years after escaping them. It is this corrupted power, greed and control within the abusive church system which leads to even worse damage in a victim’s life.

Religious abuse can also directly affect other areas of a victim’s wellbeing. If victims believe the abusive teachings, they can have a distorted view of God and spiritual ideas; thereby inadvertently abusing others themselves, like their own children. This often ushers in emotional abuse also; where love and trust can be based upon one’s loyalty to the church or its rules. Paranoia becomes constant, fear of being humiliated or punished is endless, and the pressure to perform and not fail is elevated (Johnson & VanVonderen, 1991, p. 73-77). Sexual abuse is another factor which often associates with religious abuse. A church leader with total control of his victims can easily manipulate them into rationalizing his sexual assault, rape, or exploitation. Sexual exploitation is one of the most common abuses linked to religious cult-like organizations across America (Lalich, 1996, p. 4). Emotional and sexual abuse, along with distorted thinking could eventually lead a victim to consider suicide as an escape, thus multiplying the destructiveness of religious abuse.

How can victims of religious abuse escape? First, they must learn to recognize signs of abuse within a church. David Johnson lists some signs as “power posturing, performance preoccupation, unspoken rules, lack of balance, paranoia, misplaced loyalty, and secrecy” (1991, p. 63-78). Some abusive churches are initially very friendly and appealing, that is also why their trap is effective. Victims often rationalize their abuse, so recognizing that it’s ongoing is vital. Second, recognize that the Religious control is based upon submission of those who believe in it; thus victims must understand their true personal liberty, and that they really don’t have to put up with the abuse. The final step is to break free from the abusive church, including everyone associated with it who could still affect the victim. Victims should completely and immediately separate from every area of interaction with the church. The victim should note that any attempt to change the church is usually futile. Attaining total separation will initiate a healing process.

Once on the outside, victims may immediately begin to recognize the traits of abusive churches. This can empower them to break the cycle of destructive control in their lives and begin to recover from commonly reported experiences such as chronic depression, rape, fear, physical abuse, permanent emotional scarring, and even suicidal thoughts (Lalich, 2013). Victims who have broken free also become some of the best people to help others escape abuse. Escape is one of the most difficult and painful actions that victims can take, but the freedom, healing, and fulfillment that comes afterward is worth more than money could ever buy.

In conclusion, religious abuse is more widespread than one may think. In 1996, there were over 5,000 religious cults in America with more than 185,000 new recruits reported annually (Lalich, 1996, p. 1). If victims are attentive enough to see the warning signs present in an abusive church and they understand that they don’t have to submit to abuse, they can escape and eventually heal from it. The dark, evil beast of religious abuse can be defeated, but only if its tactics and weapons are understood. There are many thousands today who are becoming new victims. When will it ever end?

Lalich, J. (2013). The Violent Outcomes of Ideological Extremism: What Have We Learned Since Jonestown? Retrieved from http://cultresearch.org/2009/10/the-violent-outcomes-of-ideological-extremism-what-have-we-learned-since-jonestown/

McClaskey, C., 2012. Religion’s Cell: Doctrines of the church that lead to bondage and abuse. Bloomington, IN: Author House.