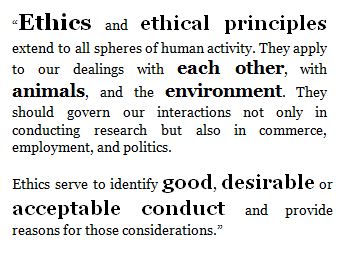 Ethics is slowly disappearing in the world. Instead of people having their own code of moral values with which to guide their lives, they have been deceived into accepting a corrupted set of values. There are countless millions that have given up personal ethics for “religion.”  In doing so, they have replaced ethics with a new term – “religious.” As a result, religion has effectively found a way to bypass an individual’s responsibility to treat others ethically. Ethical treatment doesn’t just include honesty it includes treating others with fairness, autonomy, respect, honor and dignity without regard to preference or belief. These are moral principles that all are entitled to receive. I would be very afraid of any culture that practices religion instead of ethics.

Sadly, just because you are religious does not mean you are ethical. Being religious does not mean you are spiritual. Being religious does not even ensure that you are going to be a moral person! “Religiosity” is adherence to a set of religious observances. It can be used as a façade or mask. Many wear this facade to hide abuses, sin, and unethical behaviors and attitudes. They want to appear upstanding, honest and ethical for peer approval. As a society we have merged the term religious with other terms that it has nothing to do with! Now, Religious = ethical, honest, respectful, trustworthy, thoughtful, caring, considerate, God-loving, etc.

Religious has nothing to do with all of these things! It has to do with ritual observances, not ethics. Most people will determine whether or not they will treat a person with respect, honor and dignity based on their religious observances because these observances are either rooted in, or influenced by, theological beliefs (the religion). What do we do when theological beliefs are twisted, and are rooted in lies and mens opinions? We will find abuses hidden under the façade! We will find all manner of corruption, oppression, rules, evil, and atrocities. We will also find countless victims of the abuses.

Thus, we can find a flawed pattern of thinking for many religious people in determining how some of them treat others. (When I use “not religious” below, I am referring to not keeping the religious rules and precepts [theological beliefs] and/or exhibiting religiosity by attending church or serving in a religious ministry [ritual observances].) It could go something like this:

Can you see the point I am trying to make here? Sometimes, we judge or make assessments about others based on our “religion.” Religion is the rules and precepts created by “the Church” that influence our behavior and attitude toward others. Instead, we should be basing our attitudes and treatment of others on ethics! God wants us to treat others ethically because, as Rabbi Telushkin says,  “God is a God of ETHICS.”

Ethics has to do with moral principles – judging people FAIRLY, expressing GRATITUDE, asking for FORGIVENESS when we have wronged others, expressing anger without inflicting irrevocable HURT, not speaking UNFAIRLY of others, HONESTY, INTEGRITY, treating others with DIGNITY and RESPECT, RESISTING the urge to be envious, to hate, to seek revenge. God wants everyone to be ethical toward others! This can only be done when we truly LOVE our neighbor as ourselves. Ethics determine what you will do when no one is watching. Religiosity, a product of “the religion,” is a façade used to project to others that you are righteous, ethical, and trustworthy, when in fact, you may not be. This facade totally bypasses a person’s responsibility to treat everyone ethically no matter what their preference or belief is. As a result of this new term in society, the Religious have an excuse for treating people unethically – based on theological belief! Religiosity can be used to gain notoriety, secure beneficial relationships for personal gain, hide sin, protect the evil from exposure, hide character flaws.

Religiosity and theological belief do not determine CHARACTER; although theological belief can affect one’s character. Thus, it is important to remind ourselves that just because someone is religious does not make them ethical. Let’s disconnect this term, religious, from our lives and live by ethics and integrity. Let’s treat people ethically no matter their belief, lifestyle or religious affiliation. There is no place of prejudice, dishonesty, judgmentalism, envy, strife, exclusion, or hatred within ethics. These traits only abide under a religious and theological banner where corruption has entered, taken root, and sprouted.

1 thought on “Ethical not Religious!”