Nancy’s story echoes the truth of what many abuse victims deal with in any denomination where abuse occurs. As people that represent God, it is morally and ethically imperative that we not allow these abusers to get away with their abuses. Nancy’s sons have not received vindication nor restitution for their abuse. The abusers are still walking free – free to molest other children because of the power and positions they hold. If you know of abuse in your church, or, you are a victim of abuse, please find the courage to speak out. Your story is welcome on this blog so that your voice can be heard and you can be an encouragement to the countless thousands who have been silenced by their abusers and the churches they are a part of. There is no longer a need to be silenced while your abusers move on to their next victim. Think about it, and add your weight to the Teeter Totter. Which side will you choose? 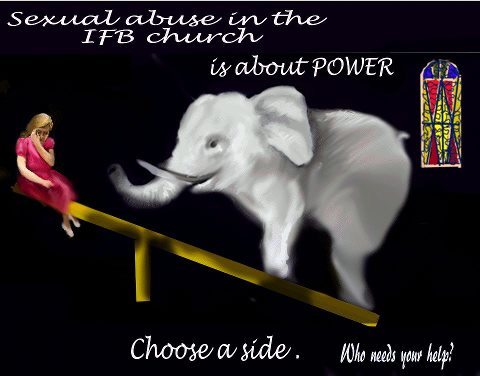 Sexual Abuse is not about sex. It is about POWER and CONTROL. The I.F.B. abusers already have more POWER and CONTROL than the Independent Fundamental Baptist victim by grooming their prey. It is our job to sit on the other end of the teeter-totter and equalize and bring balance to the victim. The I.F.B. abusers know full well how to stand up for themselves and invite others to sit on their side of the teeter-totter so they can continue to have the POWER and gain even more POWER ….POWER…POWER. I decided, finally, that I had to sit on one side or the other, but I cannot sit on both while there are still victims in pain.

Making a choice which side you want to add your weight to is an individual choice. When I was drawing the White Elephant on a Teeter-Totter, I wanted to cry because I know what it feels like to have an entire I.F.B. church side with the abusers and blame the victims (my sons) as liars and bad people. I have chosen to find the POWER with GOD. I choose to seek power to heal my family and others who were hurt in the I.F.B. church.

I had a lot of therapy after the I.F.B. abuse and, the comment I remember the Doctor saying every time I would say, “I think I will go back to Calvary Baptist Church” was this:  ” Well Nancy, you know what that soup tastes like.” Each time I went back and sat by the elephants in the pew, I grew sicker. Then, I was put in a position as I entered the I.F..B church on Mother’s Day, of all days, to have to shake my son’s abuser’s hand because he was the I.F.B. church greeter and was giving flowers to the Moms.

I took my little red rose from him and walked away after doing my little plastic smile. It felt like GOD HAD STABBED my heart as I walked to my Sunday School class thinking, “Did you just smile and take a flower from your son’s rapist on MOTHER’S DAY?” I argued with my thoughts saying, “but I told the I.F.B. church leaders and they still put the RAPIST as a GREETER on Mother’s Day.” I knew what God had to say to me and what I had to say to myself. “You know better…so do better.”

With fear in my heart, a rose in my hand, and God at my side, I walked out of the church’s back door and again walked in the front door to be received by the Greeter. He looked at me as if to say, “Didn’t we just do this?” I held my breath…deep breath, as though I was taking in the Power of God, and I told him that my son had told me about a spanking and the terrible thing he had done to him during the spanking. He looked at me and said, “I don’t remember ever spanking Doug.” He continued to inform me how many boys had told him how much they appreciated their “spankings” and he finished his statement saying with tears in his eyes that “He loved those boys.” He had tears in his eyes and so did I as I stood inches from him and our eyes were locked. The tears frozen in time on our cheeks.

As a therapist, I knew his words were that of a pedophile feeling justified saying “I was only loving those boys.”. As an I.F.B., I heard him say “I loved those boys and you must love me.” But as a mother, I heard him say ” Yep, I loved him. I do not believe that he is harmed, and you can not prove I hurt him because I am in a position of authority; and well, you are just a Mom.”

I made a choice that day as a therapist. I understood his tears. As a Christian, I reached out and hugged him among the tears. But as a MOM, my primary responsibility, I walked away knowing I would have to leave the I.F.B. church if they did not support me. They did not support me, and I was walked out of the church as I walked willing out in my heart.

A mother has to choose her child when the church does not. I have tried from that day forward, to sit on the I.F.B. victim’s side. I will never add my weight to the I.F.B. abuser by sitting in the pew by I.F.B. abusers, or with them, and those who cover for the abuser, saying they are protecting the IMAGE of GOD. My sons and the other I.F.B. victims are heroes — beautiful and innocent little boys and girls who deserve our support. SO, sit with the victims! They need you!

The I.F.B. abusers have hundreds of supporters in the I.F.B. church as well as its leaders. Are you smiling and taking a red rose from a child’s abusers? Are you taking a rose to your seat in the I.F.B. church of Pastors who support the abusers instead of the I.F.B. victims? Are you sitting in an I.F.B. pew thinking you can hold on to your rose and hold the hand of an I.F.B. victim? Sit up IFBers who are not speaking up against abuse and SMELL THE ROSES.