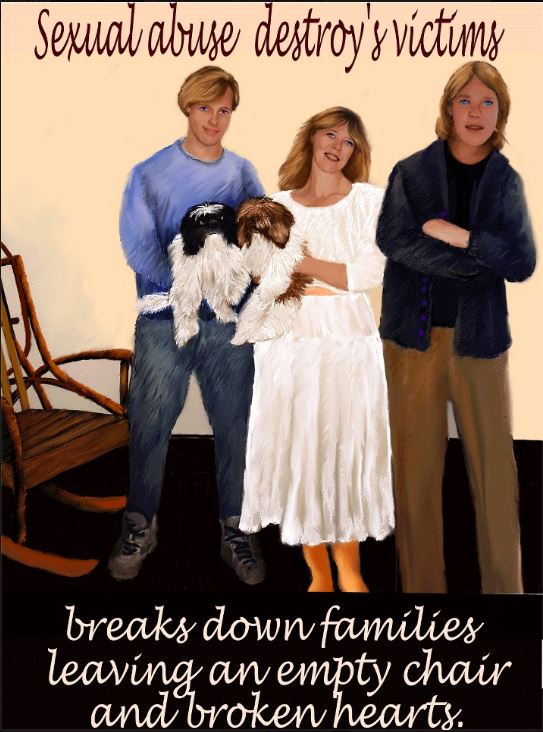 Dear One, and Family,

The pain that you all have suffered is at least familiar to me in that I had a 16 year old son whose Independent Fundamental Baptist teacher at Marantha Baptist Bible College groomed him for sex and engaged in several acts of sex with him from the campus, to cars and even a motel room. I saw the destruction this had on my son, and likewise, the pain and destruction spread to every member of our family. After the abuse, his younger brother withdrew even more into his own world. I was hospitalized a couple times for severe depression that reoccurred for years. My husband’s spirit was crushed and he lost much of his identity as well as the loss of his job as an IFB teacher in the Maranatha Baptist Bible college system at Calvary Baptist school. We, like you and many others, were told to leave the church and forget the abuse of our child. We were even told to move out of town; out of our home we had just purchased in Watertown WI.

Now, I do not know if this was the right thing to do or not, but after the official firing from our IFB teaching jobs and shunning, we decided to take root instead, and be a thorn in the IFB flesh. Well, they never even saw us right under their noses. We were the MBBC’s dirty little secret and the victims of a crime that they just wanted to disappear. We stayed in our home and tried to go on as a family. We tried to hold on to one another. I cannot tell you as a victim of IFB abuse what would help you through this family trauma except, I feel like I have learned from the destruction of our family that it may be human nature to blame ourselves or even to blame our partner because we were told we were bad parents; that we could not stop our son from acting on sexual urges like Joseph did running away from Pharaoh’s wife, leaving the robe in the woman’s hands.

Perhaps you have also been blamed by the IFB as being as guilty as the victims, parents and/or siblings. I want to tell you to ALWAYS REMEMBER THERE IS A BAD GUY and it is the abuser. For sure, 16 year olds are no match for the IFB leaders they have been groomed to follow. THE BAD GUYS are very POWERFUL and, in the case of our family, the power was so destructive and the more we tried to figure out what happened, the more confused we became. We ended up blaming each other as parents and finally, divorced. This is why the chair is empty in our family picture. I think I lost respect for my husband for not standing up to the IFB leaders who harmed the family. I was wrong to have fallen into that feeling. I know now that I should have supported my husband and to see the evil in the church cover-up. We talked about the abuser and her evil choice but, to hold the IFB church leader responsible was a journey. I think I felt I had to choose either the church I believed in, or my husband who I believed in, or my son who I believed in. The church did not protect the family!  We as parents did not protect our son. We divorced and could not choose each other in the midst of this trauma. We were all in shock as I am sure you are who have suffered similar abuse.

You are in shock. That is important to know and you need immediate support. But, your IFB church, friends, and pastors, have turned you away. Who would not be in shock. You send your children to an IFB school to be groomed for rape? No parent would do that if…if…if we had only been warned. If someone who had been abused in such a way in the IFB church before my family and yours were harmed, perhaps we would have heard the alarms. The shock of hearing your child has been raped is beyond words. I know you understand my words.

I became over whelmed with hurt and fear and could not function. When I finally got angry and out of the shock, it was too late for us. I got angry at my husband and myself and forgot to get angry at the abuser and the IFB church that further abused us. Well, this all makes me cry to feel a little bit of what you all are feeling. Watch your child for depression and use professional counselors as you can. Also remember, GOD did not do this. There was an evil person using their free will and God’s name to lure an innocent young one into a sexual web.

My heart is connected to your family and your child that has been victimized. Our children have been so brave. I applaud your child and my sons who have survived. I see the heroes…but not soon enough because my other son hid his IFB sexual abuse in the MBBC system from me for years and years because he saw all the suffering his brother’s abuse had caused. In a way, he sacrificed himself to protect his family but, caused his own trauma to fester and he rotted in silence and still carries that trauma today as he fights alcoholism and the memories of the abuse.

PRAISES to these young people who have suffered a pain we will never understand and yet they are still with us. My love and prayers to you and give your child a big hug from my son to your children who have suffered sexual abuse in the IFB church as these children are kindred spirits. Be proud, cry, laugh and keep the family together at all costs.

Love Nancy Bicknell – just another Mom who gets it.