RELIGIOUS ABUSE encompasses many religions  and religiously run systems across the world. It is not a problem that is just happening within U.S. borders.  Within each religion the abuses vary but, one facet of religious abuse crosses all denominational and systemic barriers; that facet is that the majority of the abused are women and children. Women and children have no protections from these religious abuses because RELIGIOUS LEADERS have been allowed to have free reign in establishing the rules and guidelines that followers must adhere to for their respective religions and/or religiously run systems. They use man-made religious writings of the early centuries to enforce their dogmas and rules on the present culture and times. What many do not realize is that these writings were written for the culture and times of their day, not for today’s time and culture.  God is a God of TODAY, not yesterday.  And, most religious writings have been tampered with and changed by religious leaders and scribes throughout history to point people in the direction of their preconceived opinions and ideals. These changes have been made in order to bring women and children under complete and total domination of men for sexual exploitation.

For centuries, religious leaders have used BEHAVIOR MODIFICATION, THOUGHT REFORM and INFORMATION CONTROL to bring about conformity to man-made rules. Those that do not conform have been murdered and/or mutilated.  As a result of this free reign across the world for centuries, inequality exists in the world whereby women and children are the primary targets of the abuses meted out. To escape the abuses can mean any or all of the following for an abuse victim: shaming, shunning, financial destruction, labeling, mutilation and/or death.

HONOR KILLINGS are a very strategic part of certain religions and religious systems; strategic, because it has one goal – to CONTROL by FORCE and FEAR women and children in order to prevent them from exercising personal liberty and autonomy as human beings.  Because religious beliefs are interwoven into civil laws in many Muslim countries, women and children are left unprotected. The abuses are rampant and allow men and women free reign to murder, mutilate and maim in the name of “honor” and “God.” Any “perceived” wrongdoing for a woman or child could be a cause for death, burning or mutilation. It is time for people to see the reality of the horrible RELIGIOUS ABUSES hidden within a system that is designed to proliferate a male-dominated society where the value of women and children are worthless. Before we dive into this extensive list of murders, mutilations and attempted murders, let’s learn a little about how Islam operates and what it is. The following video will help the reader to understand how an abusive religion or religiously controlled system can infiltrate, spread and take over whole nations.

WHAT ISLAM IS NOT!

For more articles and videos on how Islam is affecting America and the reality of what is taking place, click HERE.

The following indexes need to be viewed by EVERY AMERICAN. These reflect a TRUE picture of the FRUIT of this system. After these indexes, will be some pictures of Islamic Religious Abuses perpetrated upon women and children. WARNING: These pictures are graphic!!!

This index is provided by WikiIslam and can be accessed HERE . This Index is not updated weekly on this BLOG like the Clergy Abuse Archive is. You MUST access WikiIslam to see new updates added to this list.

This is by no means a comprehensive list as many honor killings are covered up just as U.S. religious sects cover up their abuses.  The reality is that RELIGIOUS zealots and fundamentalists can be dangerous. Those religions and/or systems that harbor these abusive zealots and fundamentalists, need to be identified and the populous made aware of them. It doesn’t matter what people say about their religion, if women and children are being abused, suppressed, oppressed, strictly controlled and harmed, then we will know them by their fruit, not their words.  Any silence on this issue from those within the religion or system, makes them complicit in the crimes committed. Anything less than 100% support in stopping these crimes and changing laws to protect women and children, makes them complicit in the crimes.

Please share these indexes with everyone you know so they can see how abusive this religiously controlled system can be. Share the pictures as well. It’s time for our eyes, as well as the eyes of peace-loving Muslim people, to be opened to the truth about the dangers of this religious system’s dark side. Let me say that EVERY religion has a dark side. The dark side of this one just happens to be the LEGAL right to burn, mutilate and murder women and children. These indexes are provided for reference purposes only.

The following photos are only 30 of the countless photos of mutilation and murder of women and children that I have found on the internet. Many of the photos could not be put here because of the graphic nature of the sexual mutilation done to the women by Muslim men because they were non-Muslim women.  It is time for American Citizens to open their eyes to Sharia and the cruelty and murder it condones in the name of “Honor.” There have been many honor killings here in the U.S. As Americans, it is time for us to take the blinders off and see the danger that ALL religions can pose when there is no escape from them and their abuses. When a religion is completely male dominated and it influences laws toward male dominance and control, women and children will become the targets of the worst crimes against humanity; especially sexual crimes and pedophilia. 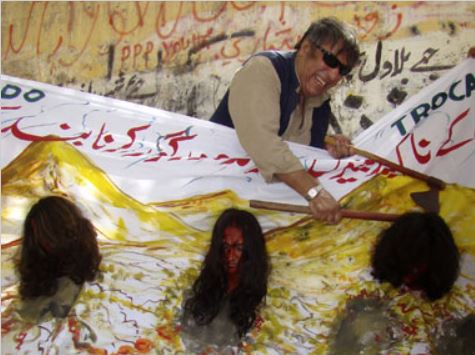 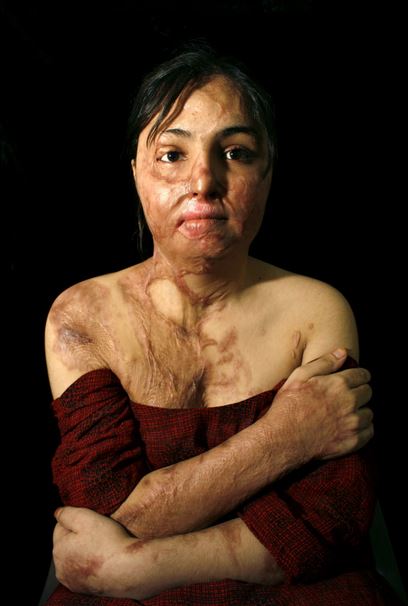 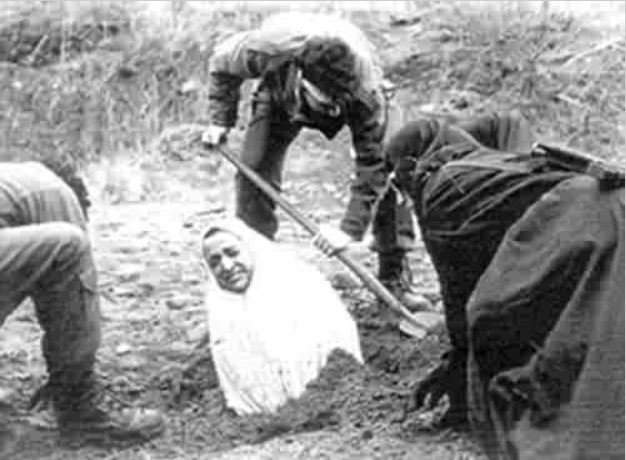 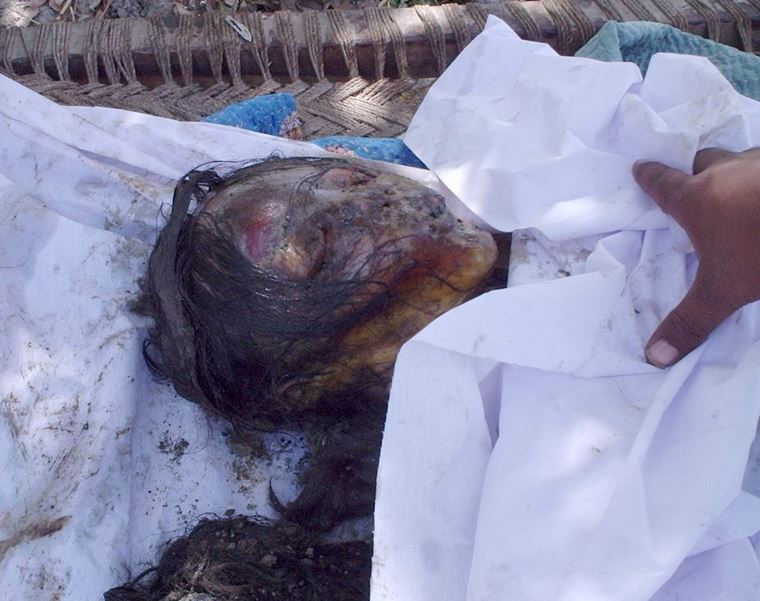 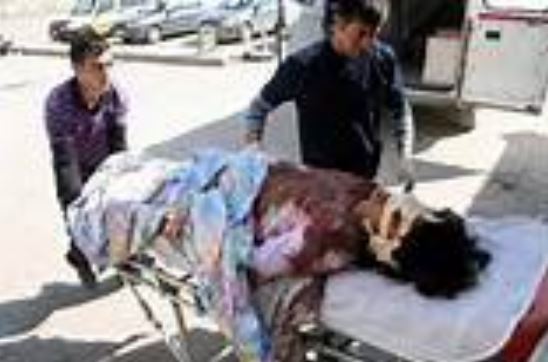 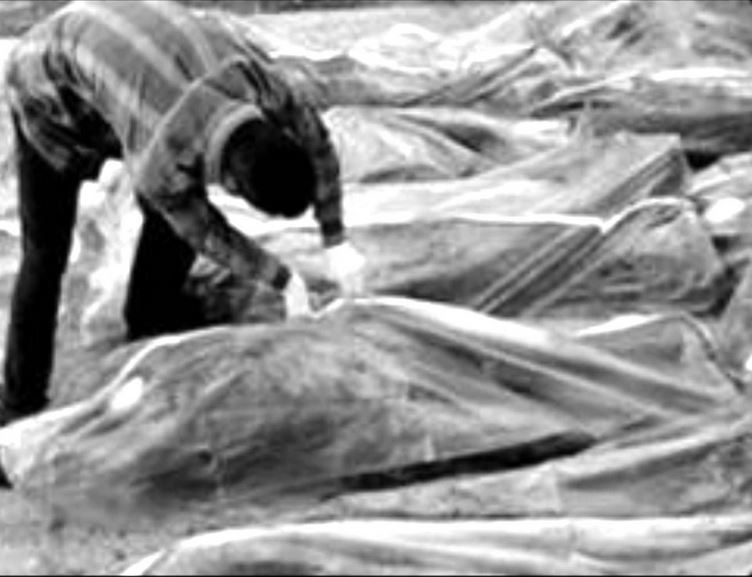 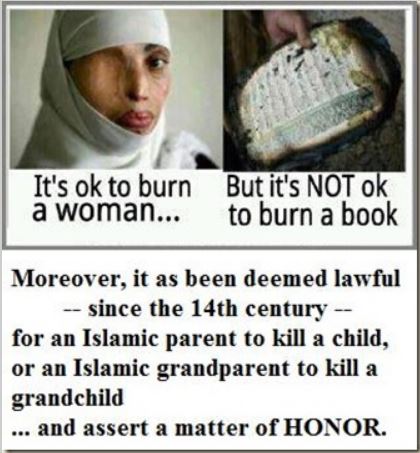