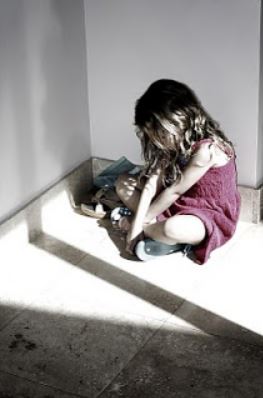 Picture a little girl running, alone, trying to find her way home. She’s six years old. She is running away from her babysitter’s house, carrying a painful secret. She’s fleeing the pornography the sitter’s sons shoved at her. And she’s fleeing something worse, something that fills her with shame.

Somehow,  she finds her house – but the door is locked, and she has no key. She runs to a neighboring house. The neighbors let her in, and call her mother at work. Her mother comes home, furious at her little girl for running away from the babysitter’s. She doesn’t ask the child why she ran home or what she was running from. The little girl is afraid to speak up on her own; she’s terrified the boys will come get her if she tells.

The angry mother grabs the girl by the arm and yanks her into the car. On the short drive home, she lectures her daughter; then she spanks her. What does this teach the little girl? Don’t run away, and always obey adults no matter what. The mother sends the girl back to the sitter’s house, this time under orders to apologize to the boys — for not obeying them — and to promise them she won’t do it again.

So for one year, every day the little girl goes back to the baby-sitter’s house, and every day the older boys sexually assault her repeatedly.

To avoid the hurt and pain, the little girl retreats into her mind, pretending she’s not the one being raped. At home, she’s miserable; no one will listen to her. She throws fits, trying to regain a sense of control.

Finally, the babysitter and her children move away. The little girl loses her best friend — the sitter’s daughter — but she also is finally free of her tormentors. She won’t have to look at any more naughty body parts or feel the shame and pain of the violations she suffered.

The little girl finds comfort in the idea of Jesus. She loves to sing the hymns: “Stop and Let Me Tell You,” “The Lord is my Shepherd,” “We Have a Great Big Wonderful God”… She feels safe — for a little while.

Then she discovers that among her family’s friends is a father who likes little girls. By this time, the little girl craves a father’s attention; her own father is always angry, always yelling at her.

This other father likes to hold the little girl on his lap, read Bible stories … and rub against her. This teaches her that rubbing grown men, and letting them rub her, is natural. She feels shamefully invaded and good at the same time. The other father tells her God will only forgive her sins if she does as the man asks; he says the girl must forgive him or she’ll go to hell. He tells her he’ll kill her if she tells anyone.

Once again, the little girl retreats into her mind while her body is invaded. She and the other little girls keep going to church. They accept this is just the way things are for them, that they’re meant to be used by men. Sometimes they love Jesus; sometimes they’re very angry.

At home, life only gets worse. Her parents fight all the time. Her father hits her when she whines, fusses or disobeys. He comes home drunk; he yells, hits and threatens the little girl and her mother. So the little girl keeps going to the older men who fondle her and make her feel like a princess.

By the time she is 13 years old, she has a miscarriage. She wears pink lipstick and dresses in clothes meant to get boys to look at her and like what they see. Soon she is an all-grown-up girl, yelling at God in her mind, trembling in fear. She’s tired of her father berating her for getting pregnant; she’s tired of being forbidden to see boys.

Then she finds an escape. She starts to run track, play volleyball, and study hard, avoiding the pain and sorrow her father still doesn’t want to hear about. She hurts deep inside, but she doesn’t know why.

She thinks often of ending her life, but each game keeps her going. The crowds cheer for her, people smile at her. She hides behind a plastic smile. She’s voted the school’s most popular athlete, and the nicest person, of her senior year. She goes on to college to play ball. She no longer wants to be around Christians; she believes God is a joke or a myth who offers neither hope nor love.

Then the all grown up girl’s carefully constructed armor shatters. She falls and tears her Achilles tendon. For two months she can’t play ball, and she can’t escape the pain and confusion inside. She’s never the same. The cheers on the ball field aren’t enough to keep her going anymore.

She has a boyfriend, but he pushes her to return to Jesus. She wants to, but she can’t. She trusts no one with her pain. Instead, she gets drunk and tries to kill herself. That’s when her angel finds her. The angel — a true friend — gets her to the emergency room in time to save her life.

Her angel-friend invites the girl to her home. The girl is surprised to find that this angel has nothing but love to give her.

It is to the this angel-friend that the girl finally releases bits and pieces of her long road of torture, pain and sorrow. For the first time, the all grown up girl is held and rocked as she weeps out her pain. She’s afraid she won’t be able to stop. The angel reassures her that it’s okay to cry as long as she needs to.

The all grown up girl was 19 years old.

Emma Wise is the pen name of a woman who was sexually abused as a child. In the years since she tried to kill herself, she earned a bachelor’s degree and two master’s degrees. With the help of therapists and her faith in God, though not organized religion, she has built a life and is married with three step-children and five grandchildren.