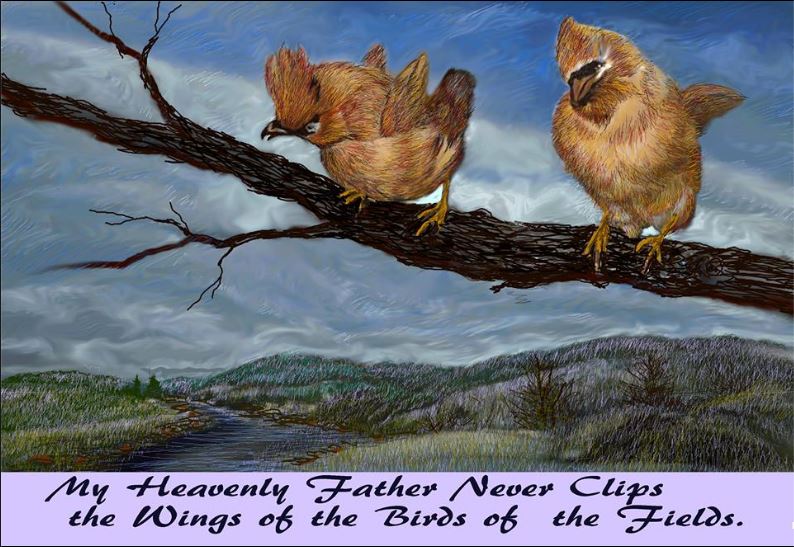 A dear friend of mine who had a child murdered has been unable to get those who were aware of what and how her child was killed to break their silence and speak out.  We were discussing justice and how the Christians in our life say “God will bring justice in His time, we have to wait until God is ready.”  My friend responded “Yep, and our Heavenly Father feeds the birds of the air …but they have to go get their own food.”  I was rather taken back with a  moment of enlightenment. Sure, the birds in my back yard do have to leave the safety of the branches and go get the food that God has provided for them.  I think the idea that God does not spoon feed us applies in the area of justice also.

My friend is very aware of those who know what happened to her child and have not come forward to give the authorities the pieces of the murder mystery that they have.  Each party has a piece of the puzzle and is hiding that puzzle piece under their bed; or, in the case of Christians, in their Bible.  The scriptures used to clip the wings of the victims of abuse are many.   I know that in the case of my sons sexual  abuse, we were told to “Forgive lest you not be forgiven,” “Do not touch God’s anointed,” “Judge not, lest ye be judged.” CLIP, clip cli… Other Christian friends and leaders talked to us about not letting the root of bitterness grow in our hearts and to not be a traitor in God’s army.  There are endless ways the evangelical religions have clipped Clipppppppped and clipped away at the wings of the victims of abuse within churches using scripture.

Once a victim realizes that using his wings to go for the food of justice means running a gauntlet of bullets shot at him by their church members, the victim sits in shock on their branch and looks for the food they are unable to see from so far away.  They become frozen in fear and, knowing their wings are clipped, intimidates them even more.  One may think the birds would glide slowly to the ground and search and even flap their wings harder to make up for the shortened wings.  The ideas of how to fly through the bullets on shortened wings are many from the Job-like friends.

I am often in shock when I see, as in our case, the  I.F.B. leaders looking for the  spiritual scissors to chop off the wings on one of it’s own victims.  I want to say. “God says we need to soar like eagles, so why would you be  cutting off the very tools God gave the victims to fly?  Would it not be God’s will that you help the victims of abuse in your church to strengthen their wings so they can fly toward justice?”   I can only rationalize that the I.F.B. leaders do not want the victims of abuse to fly toward justice because the church would have to then use  their scissors on the predators in their pews and pulpits.  Cutting off the wings of the predator who hurts victims would be justice just like putting the predators in cages (like Jack Schaap of Hyles).  How did the spiritual scissors in the I.F.B. get turned on its victims? I think God will take the spiritual power out of the I.F.B. churches and other churches who try to chop off the wings of victims. God will turn His justice on the churches who do not help the victims.  And yes, it is hard to wait, but the more victims who fly off the safety of their branches and float through the maze of the I.F.B. bullets to find their food of justice, the more predators who will be caged.  Obviously,  the will of God is that  the I.F.B. leaders  also learn to fly toward God.  If not, I think God who has the  final scissors, decides where to do the cutting.

One thought on “Chopping the Wings of Victims – By Nancy Bicknell”